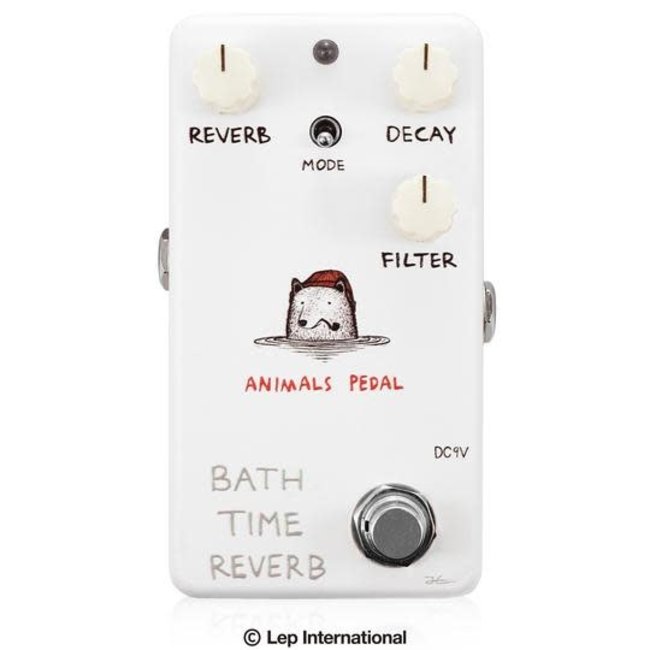 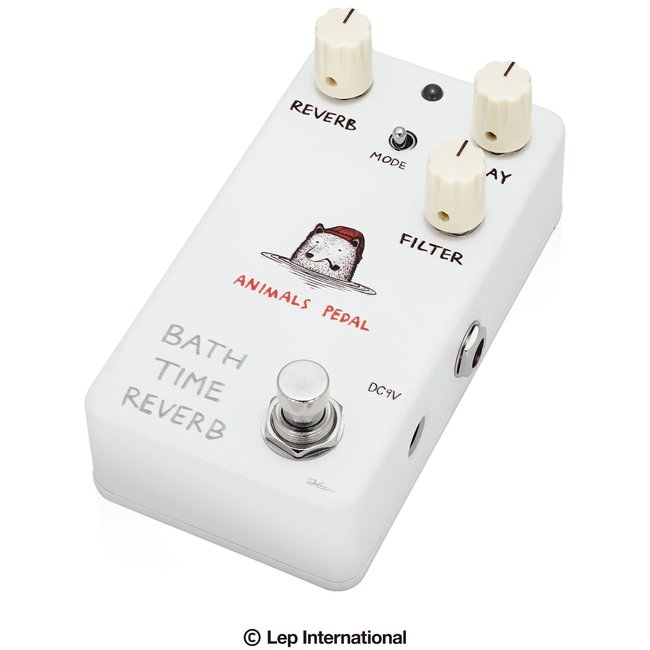 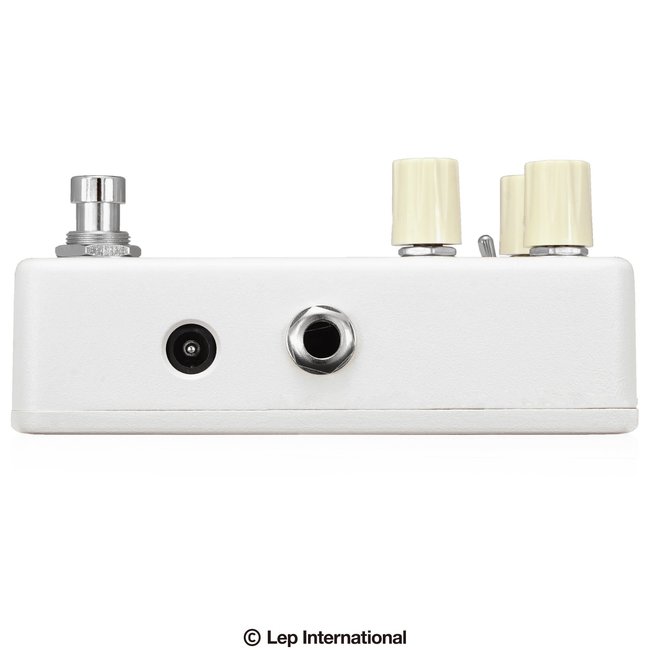 Animals Pedal BATH TIME REVERB is a standard reverb effect pedal that adds colour and depth to your guitar tone.
You can select two types of reverb sounds and set them according to your taste and music.

The new BATH TIME REVERB makes it easier to replace the battery than before, while placing a foot switch in front of it to improve playability.
In addition, the beautiful pedal design unique to Animals Pedal can now be placed even more beautifully.
There are no major differences in sound or functionality, but the overall range of timbres has been expanded and tweaked to create the best sound with more amps and guitars.
A new FILTER has been added to the controls, and the reverb selection is now in 2 modes, making it easier to understand.

Use the REVERB knob to adjust the balance between dry (original sound) and wet (effect sound). The more you turn this knob clockwise, the stronger the wetness, and the more it sounds like in a bathroom. When set to the maximum, the sound spreads from a small attack at once, and you can create a beautiful tone like strings.

You can switch the reverb tone with the toggle switch in the center. If the switch position is up, you can choose SPRING that reproduces the spring reverb mounted on a large amp, which is often used for rich HALL like the sound of a big hall, and classic surf music below.

● What is a reverb effect?
Reverb is an effect that applies a randomly set delay to a guitar sound, simulating the reflection of complex sounds as if the sound reverberates in a real space. Generally speaking, "echo" in guitar effects is a delay effect, but "echo" in karaoke is a reverb effect.
This effect aims to create a spatial expanse of sound. In the olden days, a room called reverb room, which was prepared only for reverberation, was used to create the expanse of sound.
After that, in order to create a sound spread with a compact size, a plate reverb using a thin metal plate of about 1m x 2m was developed. It was installed in studios around the world.
Although the real space is compact considering the use of a dedicated room, the size of 1m x 2m takes up a lot of space, so the reverb effect has been made even more compact.
The best known analog reverb effect is spring reverb. By adding the sway of the spring to the sound and adding reverberation to the sound in a pseudo manner, the sound is expanded and installed in many guitar amplifiers. Especially popular in surf music, you can hear the sound on many famous boards such as The Ventures.
As the times progress and digital delays emerge, digital reverbs that apply that technology will be created. This is a common reverb pedal nowadays.
The sound spread that was once created using the room itself can now be created with palm-sized equipment such as BATH TIME REVERB.

BATH TIME REVERB allows you to choose between the two types of reverb sounds that guitarists need most.
You are free to apply any reverb to any phrase, and I hope you will try it out and enjoy it, but as an easy way to use it, set the switch to HALL in the rock genre, and REVERB and DECAY are the minimum. Try setting the range up to the center.
Select HALL for slow tempo songs such as ballads, and let's fully enjoy the gorgeous sound spread.
For surf music, southern rock, classic rock, etc., choose SPRING, which creates the spring reverb sound used in amps of the time.

The foot switch is true bypass. It is powered by a 9V battery or a standard center minus DC 9V adapter. Due to the high current consumption, it is recommended to drive with an adapter.

* It takes a few seconds for the internal digital chip to operate stably after the power is turned on for the first time. During that time, the tone may not be stable, so wait for a few seconds after connecting the adapter in the bypass state.